For the second of three long weekends in May on the boys’ school schedule, we decided to return to Paris. A city we all love, only three hours by train from Geneva – why not? And this time, we would only have a small backpack each… what could go wrong? [Side note: that is STILL the only broken train door in Switzerland I’ve seen.]

We returned to Île Saint-Louis – a central, upscale neighborhood whose hotels are out of reach for a family like ours, but a good selection of affordable rental apartments that are more spacious than Parisian hotel rooms opens up a lot more options. We love this location: so convenient, surrounded by the Seine, with a sweet, quiet neighborhoody-feel – especially in the evenings and mornings before the tourists descend to get their fill of Berthillon or Amorino ice cream.

Saturday morning, we enjoyed a rare breakfast out at the delightful Le Saint Régis. Normally, we make our own breakfast and coffee at the apartment, but we had gotten in too late to buy groceries… and honestly, I enjoyed it immensely. The service was friendly, and while yes, the clientele was mostly tourists, we sat close enough to the bar to note that there were plenty of locals there too, taking their espresso standing up (we recognized the local fromager, there with his young son, exchanged pleasantries and gossip with the staff and other patrons). 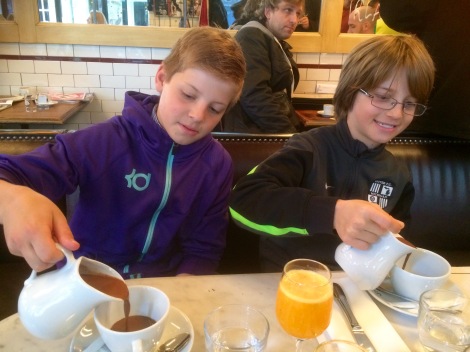 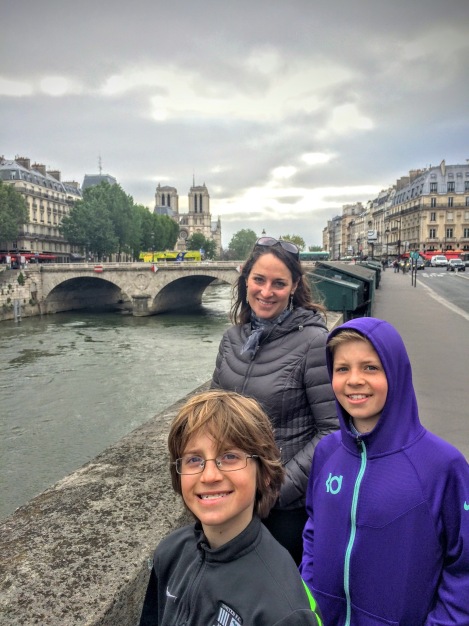 After breakfast, we made our way through Saint-Germain and the Latin Quarter to the Rodin Museum, housed in a pretty mansion and its gardens. The boys seemed to enjoy the Burghers of Calais the most, perhaps due to the dramatic background story of the city leaders, carrying the keys to the city and marching toward seemingly-certain death. To the delight of our iPhone steps counters, we then “popped over” to the Champs de Mars to get a good look at our old friend la Tour Eiffel. This was actually a bit further than we realized, so we had to pick up the pace to make our lunch reservation back in the Latin Quarter. Oops. Worth it though – lunch was fantastic. We had decided to splurge a bit in honor of Ernst’s birthday a few days before in lieu of a proper birthday party (not to mention, lunch is generally a much better deal than dinner). Terroir Parisien was delicious, and Ernst felt he made the right choice! We pretty much rolled home after that, but incredibly, a mere few hours later, we did manage to fit in some Amorino. 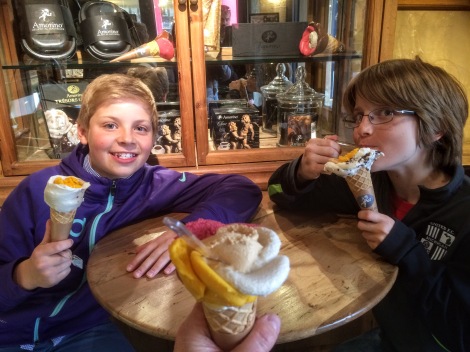 On Sunday, for something a little different, we ventured into the 19th Arrondissement to the Parc des Buttes-Chaumont. This a gorgeous park, full of people exercising, strolling and enjoying the lovely cafes. I’m glad we checked it out! After a nearby Moroccan lunch, we decided to head over to Montmartre. PapaHatch and I had gone there years ago and hadn’t been blown away, but we thought maybe we should give it another chance. Exiting the Metro into a crush of tourists and Eiffel Tower key chains was not an auspicious reintroduction. We made our way a few blocks over – much better – to take a path less traveled to the “Mur des je t’aime“… it’s kinda cool. Heading up to Sacre Cœur was not an option… last time, we found it unimpressive aside from the view, which can be had in any number of other places in Paris (faves: from behind the clock in the Musée d’Orsay & at the top of the Centre Pompidou). Overall, I am sure it’s possible to find the cool character of Montmartre… but it’s not easy and for most tourists, overrated. There, I said it. 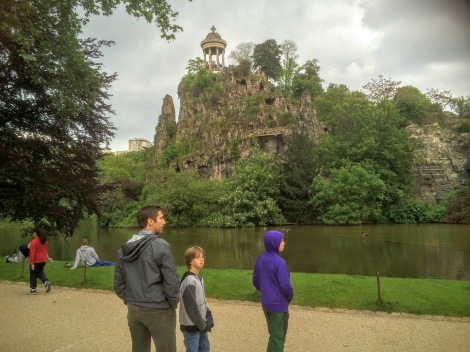 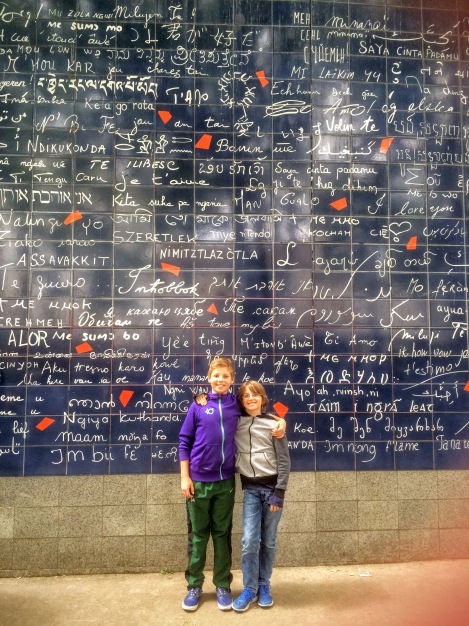 For something totally touristy but in my humble opinion NOT overrated, we stopped into Shakespeare and Company. I adore this place, and our boys did too. Such a cool bookstore, with loads of history (ha ha, get it?), a friendly staff and all kinds of intriguing nooks and crannies. We each bought a book, and I must say after spending most of my time on a Kindle lately (great for traveling, for sure), it’s nice to turn actual paper pages again. Fritz and I had a nice time strolling leisurely back to Île Saint-Louis, poking into the booksellers’ booths and gawking at caricature artists and roller-blading performers. 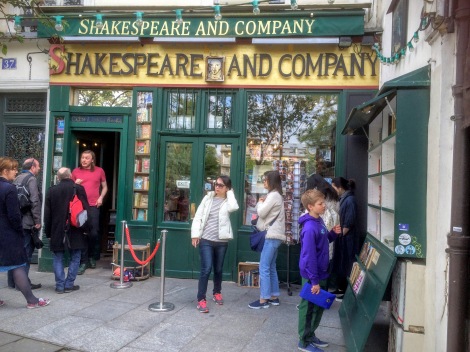 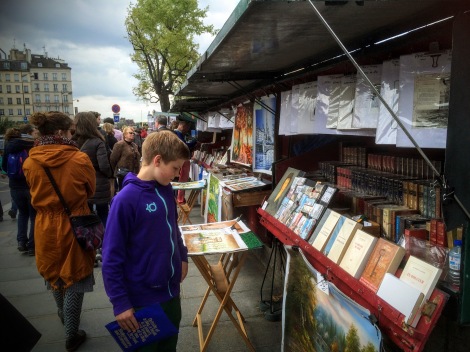 Always fun to browse the wares of les bouquinistes.

That night, PapaHatch and I decided we needed a date night. The boys were only too happy to have a night in with their normally-restricted video game devices. We took a ride on the always-fun Vedettes du Pont Neuf (hint: pre-purchase tickets online for a better rate; second hint: buy drinks/snacks at the little bar by the ticket booth before boarding). I’d forgotten about the lively scene on the left bank just south of Île Saint-Louis… on the Quai Saint-Bernard, there was salsa dancing in one part, swing dancing in another, etc. Fun! We followed our cruise up with an awesome dinner at Au Bourguignon du Marais in my favorite neighborhood. Excellent food, wine and service. We will definitely go back! 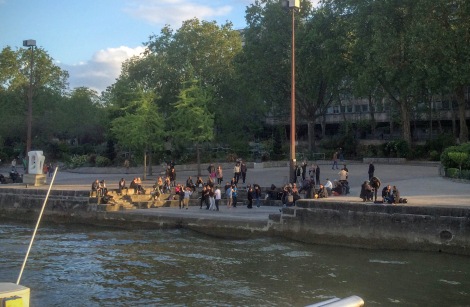 Salsa on the Seine, as seen from our river cruise (Vedettes du Pont Neuf) 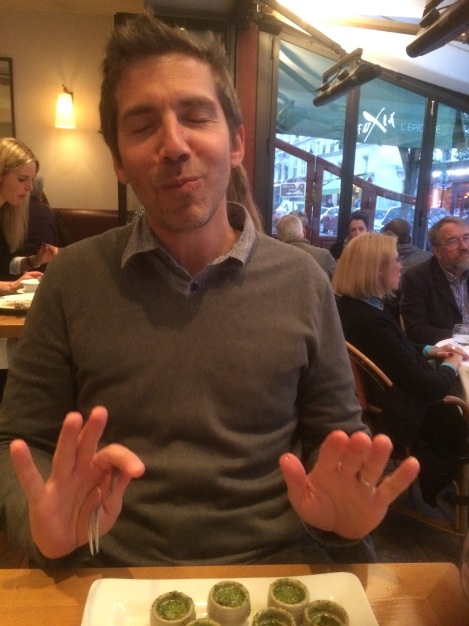 PapaHatch really enjoying his escargots in the Marais

For our last half day, Ernst really wanted to go back to the Centre Pompidou. Now, our boys are pretty darn good sports about going to art museums, but let’s just say we adults still usually drive that agenda. So when the newly-minted ten year old actively wanted to go? We’d better go! This was another lesson in pre-purchasing tickets… as this trip was much “looser” than our (some might say militantly) planned week last August (see trip reports I and II), we did not have Museum Passes this time to let us “skip the line.” Instead, I was able to find free wifi (a bit risky… but so was having to skip lunch if we ran out of time before our 3pm train) and pre-purchase tickets right there as I stood in the fast line. Woohoo! Anyway, the Pompidou is whimsical and weird, with great pieces from familiar artists (Picasso, Matisse, Dalí) and unfamiliar (e.g. last day of an exhibition I loved by Gérard Fromanger). 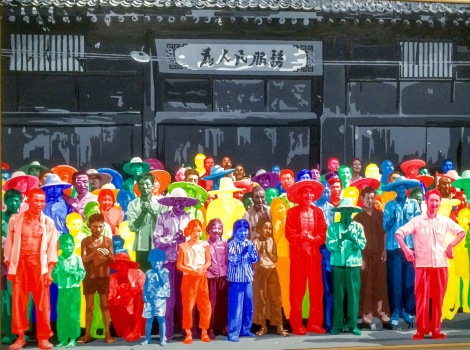 Love this painting by Gérard Fromanger 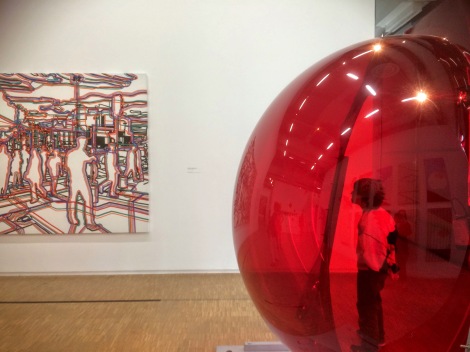 Ernst having fun at the Pompidou

Now for the best part. We were leaving the museum, deciding where to eat before catching the train, when we heard – in English – “You people look lost. Can I help?” We turned to find a grinning American – our good friend Todd who now lives in Shanghai. WHAT?!?!? He happened to be in Paris for work and just happened to be standing outside the Pompidou. Insanity! He even had time for lunch, so we had a delightful catch up session. There’s nothing I love more than a crazy small world coincidence! A great way to wrap up our Paris weekend. 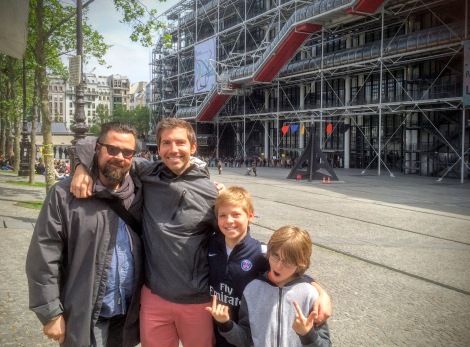 On the train back home – three hours to Geneva then 1.5 hours to Fribourg – I was captivated (again) by how rural and how pretty the scenery is. Cows dotting the green hills interspersed with bright yellow rapeseed fields, dramatic cliffs towering above twisting rivers, adorable villages protected by medieval turrets and pointy steeples, and the ever-gasp-inducing snow-capped Alps reigning over sparkling Lake Geneva. Happy sigh.